Originally published in 2014. Note the link to a Daily Camera article which may be behind a paywall — Survey: More than half of Boulder homeless who sought help at center were new to city from 2013.

I’ve been here for six years now — since February, 2008 — and with each passing year there seem to be more of the worst-behaved bums flocking to our fair city. I’m talking about the small minority, 20% by my estimate, who have no respect for themselves, no respect for others, and no respect for the broader community.

Homeless families with kids, underage youth who are on the streets to escape abuse at home, and the majority of single adult homeless people are not causing all of the problems in Boulder’s public venues.

I believe the public has just about had it with the bums who have no ties to Boulder, and who come here simply to grab all of the Free Stuff that’s available. I sense an increasing level of frustration among members of the general public, many of whom avoid Boulder Creek Path/Central Park, Pearl Street Mall, and University Hill (just as I do) because of the rat packs of unwashed alcoholics/drug addicts and petty criminals making a nuisance of themselves. Frankly, Boulder City Council has been slow to respond to citizens’ legitimate concerns, despite the pissing and moaning of apologists/enablers that transients’ “rights” are being violated.

Remember, for the local homeless shelter/services industry, More Homeless People = More Money and greater job security for bureaucrats, social workers, case managers, mental health and substance abuse counselors, and many others who make a living on the backs of poor and homeless people. They have no incentive to “end homelessness” as they claim is their goal, when they’re soliciting your financial support.

Consider this comment from someone who works in an area overrun by the bums (I’ve edited out the particular workplace):

“Was delayed leaving the _______ tonight due to a screaming fight among the street people on The Bridge. I’ve run out of compassion for these filthy psychopaths but feel extremely bad for the INFANT one of these guys was holding. An infant kept among the violent and drug-addled on a freezing night. How are street people allowed to keep babies? My departure was further delayed by a street guy who knocked me to one side with his dirty overstuffed garbage bag. I’m really very tired of this. Drug-dealing and fighting and stealing are not part of the purpose for which the _______ is intended.”

‘Survey: More than half of Boulder homeless who sought help at center were new to city’ from the Daily Camera last May. The survey results are right in line with my observations these past few years.

Many nonprofits in cities across America are now requiring valid photo ID as proof of residency before shelter/services are provided to homeless clients. It’s long overdue for Boulder Shelter for the Homeless, Bridge House, and other groups here to adopt the same policy. I’m not without compassion, however; the transients could be handed the $5 bus ticket on RTD back to Denver, along with a couple of peanut butter and jelly sandwiches to-go.

It’s not only infants who concern me, but dogs who are being abused and/or neglected by the transients: 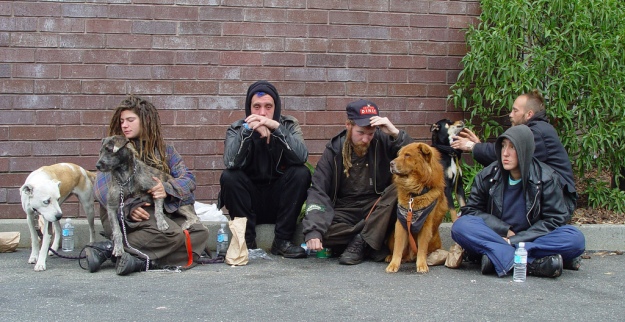 Time for a change in public policy in re homelessness. Are you listening, Boulder City Council?